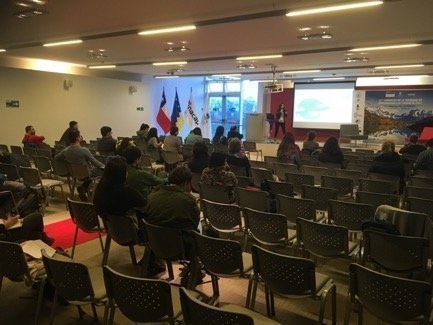 The following is a report of the activities carried out within the framework of the Tourism Research and Development Network in the month of April 2019 in Chile. Activities co-organized by the Center for Research in Patagonian Ecosystems and Universidad Austral de Chile and co-financed by Universidad Austral de Chile, Universidad de Magallanes, Consulate of France in Chile, Ministère de Relations Internationales à la Francophonie de Québec, Canada.

1. Tierra del Fuego and the meeting on scientific tourism on April 22, 2019

From April 19 to 23, 8 members of the network (François de Grandpré, Université du Quebec, Canada, Pascal Mao & Nicolas Robinet, Université Grenoble Alpes, France, Michel Bregolin, Univesidad Caxias do Sul, Brazil, Laura Rudzewicz, Universidad Federal de Pelotas, Brazil, Fabien Bourlon & Bárbará Jacob, Centro de Investigación en Ecosistemas de la Patagonia, Chile, Katerina Veloso, Universidad Austral de Chile) visited Navarino Island and the town of Puerto Williams to learn about the experience of implementing a scientific tourism project of the Universidad de Magallanes and Fundación Omora. The “Tourism with a magnifying glass” and “Environmental field philosophy” program developed since 2006 is an example of collaboration between researchers, visitors and local actors that fully qualifies as scientific tourism. This initiative, centered on the Omora sub-Antarctic ecosystem discovery trail, the presence of an ethnographic museum (Martín Gusinde Museum) about the Yagán people, and the Los Dientes de Navarino trail, has boosted local tourism in an isolated locality with many relevant topics for scientific research. According to background information gathered with local stakeholders, some 1500 visitors discover the Dientes de Navarino trail, 350 tourists tour the Omora park, 250 scientists visit the research center and are linked to the OMORA park and 60 students participate throughout the year in courses and educational and scientific activities of the foundation, the Institute of Ecology and the University of Magallanes.

A meeting between visiting researchers, those in charge of the Omora scientific tourism project and local tourism stakeholders, showed great interest in deepening international collaborations, creating field workshops (following the model proposed by the Omora Foundation or that of the visiting researchers of the INST network) as well as training in scientific tourism (in universities or research centers in isolated areas, such as in the future Cape Horn Subantarctic Center, which will start operating in Port Williams in 2020, https://Laprensaaustral.cl/cronica/firman-contrato-para-construct-centro-subantartico-en-pto-williams/). It has been proposed to foster exchange between actors from local and native communities in Patagonia and Northern Quebec, coordinated by Université du Québec and the University of Magallanes. Translated with www.DeepL.com/Translator (free version)

At the request of the Universidad de Magallanes in Porvenir and in coordination with the Center for Research on Patagonian Ecosystems (CIEP), a round table was organized in Punta Arenas to discuss the potential for developing scientific tourism in Tierra del Fuego, Chile and Argentina. Fifteen specialists who presented various approaches to scientific tourism answered questions from more than 150 professors, students and entrepreneurs interested in the challenges of its implementation. The debate has highlighted the importance of proposing a definition, even a broad and open one, of scientific tourism to help scientific tourism actors to develop the concept and encourage a rapprochement between research and tourism. Participatory science and scientific dissemination can help to promote better tourism development, unlike what is observed in Torres del Paine Park. A request from the traditional communities of the coast (Kawesqar) is formulated so that initiatives are developed from ancestral visions and knowledge and that scientific research or tourism development projects are not imposed. In addition, the question arises as to how to include indigenous communities in participatory scientific research projects, especially on issues of vulnerability to the effects of climate change. In this sense, the Eco-climatic laboratory of the Aysén region, a project led by CIEP in collaboration with various institutions (DGA, INIA, IFOP, COPAS Sur Austral, etc.), proposes lines of co-participatory action between researchers from different disciplines and the public-private community that will generate and transfer knowledge for the development of adaptation strategies for local communities.

On April 25, during the SOCIETUR tourism congress and a session dedicated to scientific tourism, several presentations by researchers of the network allowed to deepen the elements of the debate on the potentialities and benefits of tourism for natural territories. Studies carried out in Canada, France, Peru and Chile showed ways of implementing scientific tourism in different geographical contexts and for different tourism, territorial, cultural and scientific development objectives. Local actors and entrepreneurs have formulated technical and methodological concerns to implement scientific tourism projects. Translated with www.DeepL.com/Translator (free version)

Valdivia and the second scientific meetings on tourism of the TS on April 29 and 30, 2019.

At the initiative of CIEP and the Universidad Austral de Chile, a session of the second scientific tourism meeting was held at the university campus of the UACH in the city of Valdivia. This seminar, which brought together 10 partners of the scientific tourism network and about forty researchers, directors of conservation and tourism projects, state officials in charge of research and local development, as well as regional entrepreneurs and guides, deepened the study of scientific tourism.

The exchange of views on scientific tourism showed the complexity of the concept. While there are significant conceptual advances since the research initiated by CIEP in 2008, further progress must be made in its conceptual development (topic presented by Douglas Pearce). There is a consensus to defend the idea that scientific tourism is an activity where visitors participate in the generation and dissemination of scientific knowledge, carried out by research and development centers. It appears to exhibitors and attendees that scientific tourism is a strategic bet for tourism development in natural, rural, fragile, marginal, isolated and isolated areas with incipient tourism development. However, it is also a very relevant global dynamic and participates in a new “knowledge economy” (Pascal Mao) that OECD countries are prioritizing (as is the case of what was presented in Spain by Bernardí Cabrer).

Universities and centers that implement scientific tourism have coordinated actions between regional entrepreneurs and university centers. Pilot projects designed allow innovation in tourism development strategies (an example of Aysén as presented by Fabien Bourlon). New specific geo-spatial tools have been created (as presented by Nicolas Robinet), in order to identify thematic and territorial focal points, to identify and locate “hot spots” for scientific tourism. Destinations seeking to develop this form of tourism must meet certain conditions (as presented by Pablo Szmulewicz and Katerina Veloso) to attract researchers, students and tourists interested in topics of high scientific content. The attempt to organize the actors in prioritized themes is thus addressed in Northern Quebec, as explained by François de Grandpré: they must meet scientific standards, certain basic services and be able to provide adequate content to welcome visitors such as scientists, students, students, students from local communities or national and international tourists.

In closing, the International Network for Research and Development of Scientific Tourism is presented. It is currently carried by 5 founding partners (CIEP, UACH, U of Grenoble, U of Caxias do Sul and U of Quebec) and 15 researchers and project managers from Latin America and Europe who seek to strengthen their initiatives, share experiences and conceptual and practical approaches. Thus, the initiatives reported on the website www.scientific-tourism.org include a component of scientific research, participation of local stakeholders and visitors, and dissemination of scientific knowledge or traditional knowledge. These must bring local socio-economic benefits and be emblematic, for their innovative approaches and inclusive local development strategies. This is the call made by the anthropologist, Maria José Pastor and the case presented in Aysén by Jacqueline Boldt with the Community Cetacean Census of Aysén Mira al Mar. Universities and research centers are called to participate in this scientifically based tourism development and monitoring (as Michel Bregolin emphasized in his presentation on tourism observatories and the implementation of scientific tourism in wild protected areas in Brazil). Translated with www.DeepL.com/Translator (free version)